JFF Member
So i have been looking at building a new rig as many may know so today i decided to compare water and air cooling systems (probably when i should have been doing coursework). I don't have anything in mind at the moment i was only doing some recon and would be nice to have some info from people i know.

Although i have been to multiple web pages i wanted to know if anyone has had any experience with both as i have only ever used air cooling. Include any information you would like as i'm sure it will help someone at some time :)

Please note:
The information i am looking for is more on a experience outlook rather than product specific as i am sure many coolers will be released before i build my machine.
Brands and their reliability is good though
Last edited: Jan 13, 2015

JFF Member
JFF Supporter
Have never used liquid cooling myself but I've heard great things about the newer sealed system. Such things as ease of installation & maintenance, and price.

Staff member
I haven't done water cooling either, but at the same time, I haven't had a need to do it. Although I do hear good things about it now, since it's pretty mainstream of a thing to do, the hardware is pretty decent from what I've read.

But again, unless you're dealing with a heat issue, there's not much of a need for it (Unless you're a crazy overclocker, but then again, you'd have a heat issue if you were). All in all, I think it's a good thing, until it breaks.

The other thing to make sure of is, what are you water cooling? The CPU? The GPU? How many GPUs? Whatever you buy needs to cool the entire system because there's no point in cooling your CPU if you're GPU(s) are getting too hot.

I would assume the increased heat efficiency would reduce fan RPMs as well, making them noticeably quieter.

Dsan said:
I would assume the increased heat efficiency would reduce fan RPMs as well, making them noticeably quieter.
Click to expand...

That's a good point and not something I've thought about before. Currently my system is really quiet so it's not an issue, but I've had PCs in the past that the fans were stupid loud.

JFF Member
I'm on my second system with a closed-loop water cooler. My current system has a Corsair H80i. It is easy to set up. The part that actually contacts the processor contains a water pump. It has a little radiator that cools the water, and on my model, there is a fan in front of and behind the radiator. Unless you are doing any kind of overclocking, long hours of video or 3D rendering, or have the system in a very hot room, you don't really need water cooling. I wanted it because I do rendering.

Another plus side is for people who don't get a chance to open up their computers to dust them out, very often. With an air-cooling heatsink, you can end up with dust bunnies rolled up between the heatsink fins of the processor heatsink. The added dust causes less heat to dissipate and the processor runs hotter. This isn't the case for the water cooling system. Every so often, you can brush off the radiator, but I have found that as long as I keep my office clean, the push/pull system of the two fans o the radiator prevent most of anything from sticking to the radiator and hindering airflow.

There are open water cooling systems you can put together, and run and clamp your own hoses, fill the reservoir, etc.. I didn't want to get into all of that, so I went with the all-in-one system. It doesn't open, so it doesn't leak. The cooling liquid is premade at the factory and is the right mixture to prevent anything from growing in the system and causing clogs.

Performance-wise, I've found the water-cooling system to keep the processor at a much more stable temperature, without all of the fast swings, up and down, that you get with the air-cooler. Having the processor rendering for longer periods of time, it is nice to have the constant cooling that liquid provides.

Also, the system is quieter, but I think part of that is due to the motherboard. It monitors the processor usage and heat, and adjusts all of the different case fans and such automatically. If I am just watching videos, browsing the web, or playing an older or not CPU-intensive game, I can barely hear the computer. If I am playing Far Cry 4 with max settings, then it is much louder, but I where headphones, so that is ok.

Staff member
JFF Supporter
Water cooling essentially allows you to move the radiator from on the chip to somewhere else. This can be handy in cramped cases, but can also make things quieter since the radiator used by the water cooler can have an enormous, slow-spinning fan. Still, for the average setup I don't think it's generally worth the investment. You can find a good radiant CPU cooler with a 120mm fan that's nearly silent for way less than a water cooling setup. And as long as you keep positive pressure in the case (more air being sucked in than blown out), the inside of the case should stay pretty much dust-free.

GPU coolers a bit more tricky, as there's less room for good cooling setups on them and so they tend to be louder. But modding a GPU for water cooling is also harder, so... For the most part I recommend just buying a GPU than has been reviewed to run silent.

For example, here's my current setup: 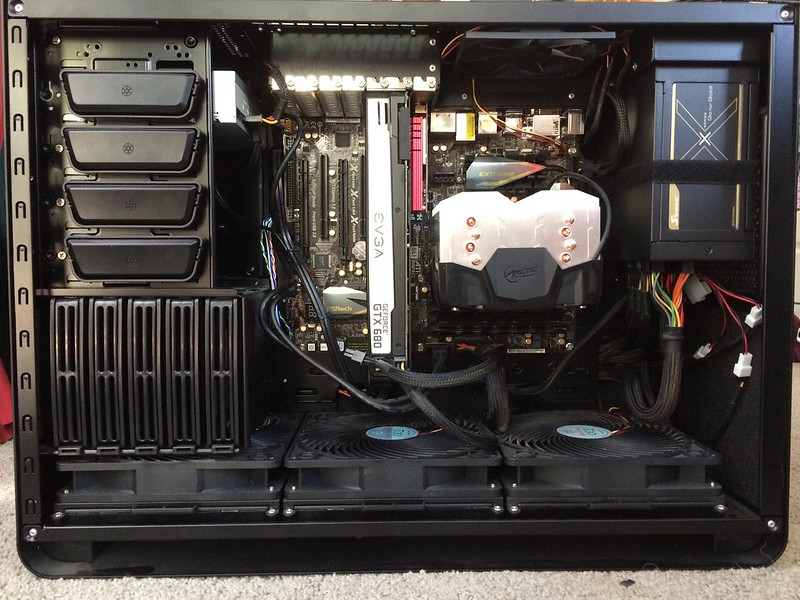 The CPU cooler is enormous and pretty much silent, and the blower-style GPU I have is surprisingly quiet as well. Water cooling would be sexier, but as it is I can barely hear my PC in a quiet room.
Last edited: Jan 14, 2015

JFF Member
The Corsair cooler I have usually runs about $80, on average, but I got it for $45 because I am a diligent deal hunter and look for coupon codes, sales, etc..


Here is what my system looks like with the water cooler: